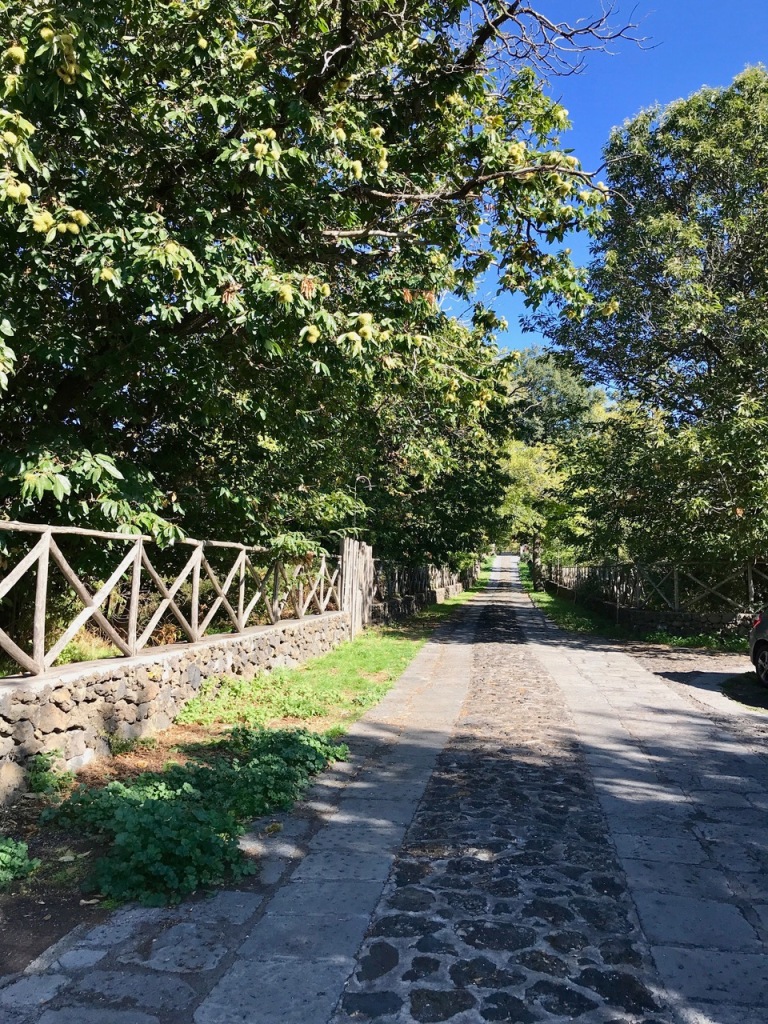 We arrived at Country Hotel Bosco Ciancio inside Sicily’s Etna Park, passing down a long and wooded driveway, the kind that makes you hold your breath because you know something special is waiting on the other end. What we saw gave us that ‘fairytale cottage in the forest’ feel as the driveway opened up into END_OF_DOCUMENT_TOKEN_TO_BE_REPLACED

The sun-splashed lungomare d’Ortigia is a sensual delight. Recently, I had made the drive to Ortigia from my lodging at Hotel Bosco Ciancio on the slopes of Mt. Etna to meet with my tour guide,  Marco Sanzaro. My goal was to discover the wonders of the island of Ortigia, the historical heart of the ancient Greek city of Syracuse on Sicily’s eastern shore.

As I walked the footpath that followed the waterfront, I couldn’t help but notice the brilliant green waters of the Ionian sea END_OF_DOCUMENT_TOKEN_TO_BE_REPLACED

Once more, I am filled to capacity with the most amazing experiences gathered in these last two weeks during my trip to Italy. Is it still bella Italia after all this time? Oh yes, in more ways than I could ever have imagined. This trip introduced me to a deeper understanding of the different amenities of both the north and south. Each is quite different from the other. But all together, they blend into a country that is richly diverse, resulting in a culture thousands of years in the making. People who, for the most part, are warm and hospitable, who care deeply for their land, and who live out their daily lives with dignity.

I’ve had the good fortune to stay at three different accommodations, each one quite distinct from the other. In comparison, they proved to be equally delightful. The proprietors who operate/own them are as wonderful as the amenities they have to offer. I am excited to share each one with you and plan to introduce them over the next few months. I feel strongly that each one deserves its own spotlight.

I hope that you will check back and discover what I have… that there are beauty, warmth, and possibilities beyond your expectations. Come and meet the people who offer an authentic Italian experience. Find out what makes their hotels, agriturismos, and accommodations so unique. I am inspired to share each one with you.

How could the Beauty of Art and the Darkness of Life dwell within a single person? Who was this man gifted with heavenly talent that chose to walk the dark earthy streets of night?

“All works, no matter what or by whom painted, are nothing but bagatelles and childish trifles… unless they are made and painted from life, and there can be nothing… better than to follow nature.”

Michelangelo Merisi da Caravaggio lived a brief and tumultuous life as a great Italian painter. Born September 29, 1571 in Milan, he trained as a painter under Simone Peterzano, who in turn trained under the famous painter Titian. Caravaggio became active as a painter in Rome, Naples, Malta and Sicily from 1592 until his death in 1610. He produced masterpieces of astonishing complexity and power, advancing the Baroque style to include portrayals of real people of the streets surrounded by stark emotional truth.

Ominous, obscure and gloomy–these are words that describe Caravaggio’s dark paintings. Radical by nature, his revolutionary art reflected chiaroscuro in an extreme form. His dramatic, theatrical use of the shift from light to dark became known as Tenebrism. As a result, he took Rome by storm in 1600 with his depictions of the Martyrdom of Saint Matthew and the Calling of Saint Matthew. Beyond this point, he had more commissions from patrons then he could handle. Unfortunately, he squandered his success. He fled Rome in 1606, after he was involved in a brawl in which he killed a man.

I used to be disturbed by Caravaggio’s paintings until I got to know who he was. A man of the streets, whose short life was shadowed by mystery and intrigue, Caravaggio was constantly in trouble with the law. Over his lifetime, he vandalized his own apartment, spent time in jail on several occurrences, and eventually had a death warrant circulated on him by the Pope.

Caravaggio’s death remains an unsolved mystery to this day. For such a dramatic individual, it’s fitting for him that his departure would be obscure. What we do know is that he was en route by boat from Naples to Rome in hopes of receiving a pardon by the Pope. Beyond this point nothing is for certain.

On July 28th of 1610, an anonymous newsletter from Rome arrived at the ducal court of Urbino announcing the death of Caravaggio. A few days later another newsletter claimed he died of fever. A recent researcher claims to have found a death notice that Caravaggio had died of fever near Grosetto in Tuscany. In 2010 human remains in the same area are said to be 85% likely to be Caravaggio’s after testing his DNA, using carbon dating and other analysis.

His death at the age of 38 include theories such as malaria, intestinal infection, murder, and lead poisoning, all considered possible causes of death.  Paints during his time contained high amounts of lead salts which can cause violent behavior such as Caravaggio displayed throughout his lifetime.

Could he have been killed in cold blood by the Knights of Malta to avenge an attack on one of their members?  According to Professor Vincenzo Pacelli, Italian historian and expert on Caravaggio, the order hunted him down because he had seriously wounded a knight. To back up his theory, Pacelli discovered documents from the Vatican Secret Archives and from archives in Rome suggesting the Knights of Malta had murdered Caravaggio and threw his body in the sea at Palo, north of Rome.

The Knights of Malta were an order founded in the 11th century to protect Christians in the Holy Land. Caravaggio was actually made a member of the order but, by 1608, he was in prison, probably for wounding a knight. He was expelled from the order and put in a castle dungeon. However, his release from the dungeon remains baffling.

Controversy still exists over this theory. Dr. John T. Spike, a Caravaggio expert at the College of William and Mary in Williamsburg, Virginia, remains sceptical. He believes that if the knights had wanted him dead, they had many opportunities to kill him sooner. Dr. Spike thinks the artist was likely killed in a brawl and his body dumped, which would explain the lack of an existing death certificate.

Caravaggio’s masterpieces, although dark, are fantastic. He employs theatrical drama and sinister shadows to intrigue and draw one in. He has a statement to make, and there is no mistaking what he intends to communicate. Like a beautiful web, you find yourself transfixed. There is no one like him. His art is unmistakable.

Rome offers several walking tours that explore the art of Caravaggio which are displayed throughout the city. Walks Inside Rome has designed a tour called Caravaggio in Rome intended to discover the many locations in Rome where Caravaggio’s artwork can still be seen. Included in the tour are San Luigi dei Francesi with the three paintings devoted to the Story of St. Matthew, followed by  San Agostino and the Madonna of Loreito. The Villa Borghese also hosts some of Caravaggio’s finest masterpieces dating across his entire career.

Caravaggio Art Walking Tour of Rome with Wine Tasting is an alternative tour that ends with a social time of wines and appetizers at a local wine bar.

Italy is surrounded by water with countless coves, beaches and inlets to charm any swimmer or sunbather. Take a day out from your busy travel itinerary and experience Italian beach life. Sun, surf, beauty and gentle breezes will refresh and relax you. Splash in the Mediterranean, then come up for a soothing sole massage. Stay and watch the sunset dip behind the horizon as you sip a cool and refreshing drink. This is one of my best memories.

To begin, it helps to know what to expect at an Italian beach. Most of the beaches require a small fee to lounge on, called stabilimenti. Included in the price is a reassurance of a clean beach, an outdoor shower for rinsing off, toilets and a dressing room where you can leave your things, a good swimming area, a bar and often a restaurant. You can rent a lounge chair and umbrella for a small added fee which is worth it. Keep in mind that stabilimenti usually close before sunset.

Free beaches do exist, however. They are usually found at the end of the private beach areas. Generally, I have found them very acceptable but not as well-kept as the pay area and restrooms can be difficult to find.

Blue Flag beaches mean that they have been certified for high environmental and quality standards. Liguria boasts 20 of the cleanest beaches in Italy.

Following are six areas in Italy that have some of the coolest beaches. Depending on where you are, you can pick and choose which beaches you want to visit.

Cinque Terre, the 5 small villages on the coastline of Liguria, have some great beaches and hiking. Vernazza is my favorite, with a small beach that is great for sunbathing, snorkeling and watching the little fishing boats come and go. Monterosso al Mare is another of the villages very popular for sunbathers and swimmers.

Rabbit Beach in Sicily is phenomenally popular with tourists and locals alike. It claims to be Italy’s number one beach for its obvious beauty; white beach, clear waters and natural environment.

Tuscany has white sandy beaches and whimsical seaside villages. Castiglione della Pescaia is a great affordable sea town with lots of water sports including wind surfing and sailing. For the largest beach town with a lively promenade nightlife, Viareggio offers the most.

Positano has always been a popular beach hang-out, beginning with the ancient Greeks and continuing with the Roman nobility (If they thought it was the best, than it must be). The busiest stretch of beach is between Amalfi and Positano. Rugged from erosion, the cliffs above you offer beautiful wildflowers and gorgeous views.

There are two public beaches in Positano: the secluded Fornillo beach and the mainstream Spiaggia Grande.

To the heel of the boot….

Porto Selvaggio, in Nardo, Salento  is a wild cove of sea, rocks and salty ocean breezes that can be reached only on foot. Part of a nature reserve, it is sheltered by high cliffs and ancient watchtowers. The water is deep but crystalline and very clean. An added bonus….it is very close to prehistoric sites dating back 40,000 years ago. Worth a look-see in my book.

The Lido beach in Venice is convenient, has clean water and soft sand. Several vaporetto lines run from Venice to Lido for 7 euros.

Make a memory…..and head to the beach!