When I was in grade school, I fell in love with Christopher Columbus, the early explorer and navigator. He sounded so adventurous – a man who sailed the high seas, braving storms and seasickness as he made his way to the New World. So when I had the opportunity to stay in Genoa for a few days, knowing this was his place of birth, I was ready to do my own exploring.

Genoa is famous for several reasons, one of which is the magnificent harbor, the Porto Antico. It is a real network of wharfs, piers and board walks backed by tall commercial buildings and stately villas.

This harbor has quite a history. It was the center of ancient trades from 400 AD up to the Middle Ages, reaching the height of power in 1100. By then Genoa prospered as a major Maritime Republic through trade, shipbuilding and banking. As the most powerful navy in the Mediterranean, Genoa controlled the sea. As I walked around the harbor, it was easy to imagine mighty ships bedecked with flags and surrounded by a bustle of boats coming and going on the sea lanes.

I found this 17th century style Spanish Galleon fittingly named II Galeone Neptune. Built in Tunisia for Roman Polanski’s film “Pirates,” the 1500 ton ship is currently a tourist attraction with a 5 euro charge to walk aboard and explore its murky depths while hobnobbing with the pirate crew. In 2011 this galleon portrayed the ship, “Jolly Roger” in the TV miniseries, “Neverland.”

The Palazzo Reale (Royal Palace) of Genoa with the Turtle Pool

Turtles, turtles everywhere! The pool was swimming with them. It must have been a recent hatching. They kept crawling out only to slip back into the water, attracting a lot of attention. 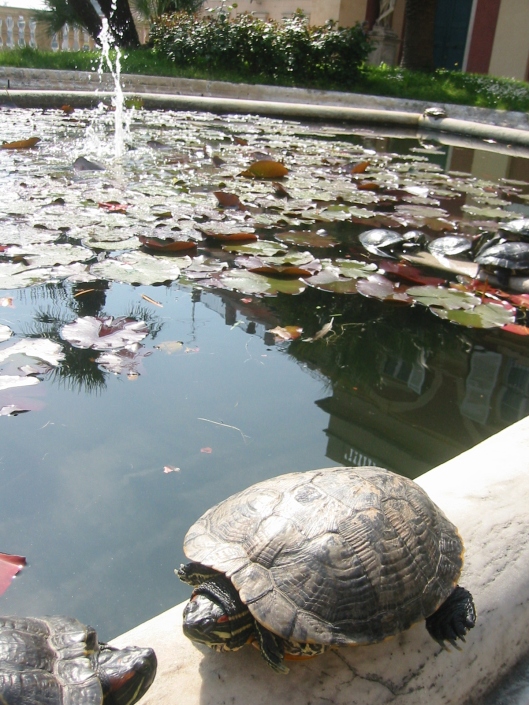 Aristocratic Turtles Conversing while Sunbathing–AND balancing on the pool rim!

The Palazzo Reale is a large aristocratic residence which has been splendidly decorated by three great Genoese dynasties. The Balbis built it between 1643 and 1650, afterwards passing to the Durazzos, who decorated it between the end of the 17th to 18th centuries. Finally the Savoy dynasty of the 19th century put on the finishing touches. Impeccably dressed and highly maintained, the palace is a pleasure to walk through.

There are over 100 paintings in the palace, most by 17th century Genoese artists as well as frescoes by some of the most important Baroque and Rococo artists of the time.

The dazzling Hall of Mirrors in the Palace. It made me think of Phantom of the Opera.

Genoa is a modern city with a lingering presence of past generations. The medieval center is remarkably well-preserved and not to be missed. The striking contrasts between old and new is strongly evident throughout the city and a delight to explore.

Charles Dickens summed up the city of Genoa very well in his quote..

“It is a place that ‘grows upon you’ every day. There seems to be always something to find out in it. There are the most extraordinary alleys and by-ways to walk about in. You can lose your way (what a comfort that is, when you are idle!) twenty times a day, if you like; and turn up again, under the most unexpected and surprising difficulties. It abounds in the strangest contrasts; things that are picturesque, ugly, mean, magnificent, delightful, and offensive, break upon the view at every turn.”
― Charles Dickens, Pictures from Italy