An evening in Florence is extremely magical. Everything comes alive, from the medieval architecture to the roving bands of locals and tourists alike. You are never far from eye-catching structures that soar skyward into the dark abyss. Charming cafes and trattorias full of chatting people line the winding cobbled streets. Merry-making is in the air.

The Ponte Vecchio, or ‘old bridge,’ was once lined with butcher shops. This is no longer the case, thank goodness. Today it is bedecked with lovely jewelry shops. You need not wander far before you hear the beat and rhythm of a nearby local band, wholeheartedly doing their best to entertain you.

Giorgio Vasari, early sixteenth century architect, was commissioned by the Medici to build a corridor that ran from the Uffizi Gallery to the Medici Palace on the opposite side of the Arno River. Here you can see the corridor continue over the top of the shops with its neat line of square windows.

Medieval and dauntless stands the Palazzo Vecchio, an important landmark of Florence since 1322. Constructed by Florentine architect Arnolfo di Cambio, the impressive Romanesque-style crenelated fortress is rock-solid. A huge bell at the top of the tower was used to call the citizens to meetings or warn them of fire, flood or enemy attack.

To the right you can see the looming arches of the outdoor “sculpture museum,” called the Loggia dei Lanzi.

Notice below the magnificent display of light and shadow on these figures in the Loggia. They appear very dramatic, especially at night.

Across from the Palazzo Vecchio on the Piazza della Signoria is the Loggia dei Lanzi, built in 1382 and designed by Orcangna. It was named after the Lancers, the bodyguards of Cosimo I who took up lodging on this spot. The Loggia is actually an outdoor museum, with twisting and grasping statues that appear especially spectacular at night-time.

*
Cosimo I de’ Medici hired architect Giorgio Vasari to build offices for the Florentine magistrates in 1560. Later, after the fall of the ruling Medici’s, it became a museum officially open to the public in 1765. Today it houses many famous paintings by the masters. Giotto, Botticelli, Leonardo da Vinci, Raphael, Titian and Caravaggio lead the parade.

Florence by night is an entirely different world. It is a world of artistic appeal to the senses, of mystery and intrigue. A world revealing shades of a former time.

Orvieto is a pleasure garden for those with an eye for architectural beauty. From the Gothic facade of the Cathedral to the intoxicating views from the ancient walls surrounding the hilltop town, a linger here is good for the soul.

Sunlight illuminates the three-gabled golden facade of the Orvieto Cathedral, adding dimension to the large bas-reliefs and statues with the symbols (Lion, Angel, Ox, Eagle) of the four Evangelists stationed across the front. Built around 1325 by Tuscan architect Lorenzo Maitani, it is considered one to the great masterpieces of the middle ages.

Florentine architect Arnolfo di Cambio designed this cathedral, which was begun in 1290.  It took nearly three centuries to finish the construction. Orvieto’s pride and joy is beautifully well-preserved. 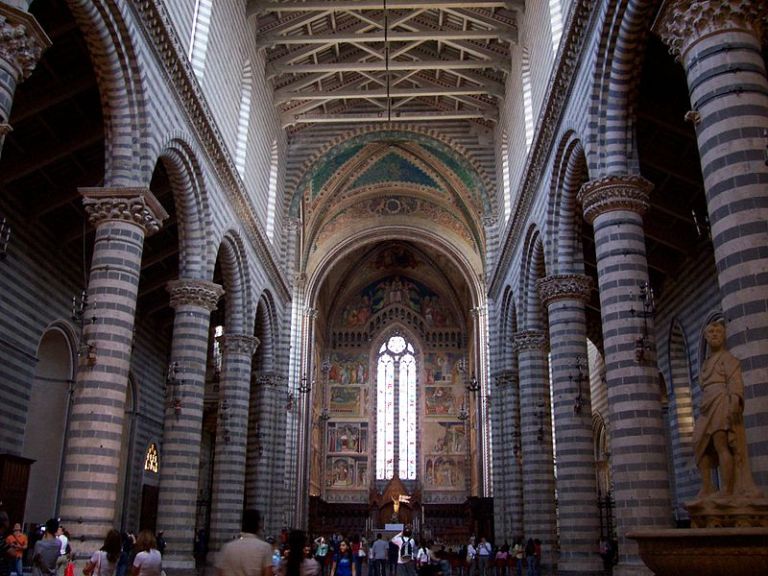 There is an old medieval wall that surrounds Orvieto. Located on a flat butte which is made up of volcanic tuffa stone, the town has been in existence since the Etruscans. In fact, Orvieto has a maze of underground rooms and tunnels that the ancient Etruscans carved out of the tufa rock. Tours are available through Select Italy and well worth the time.

Cobbled streets winding up and down between tall brick buildings and occasional palatial villas add an appeal all its own. Bargains were to be found at a busy clothing and produce market held on the piazza.

Brick walls were refreshingly cool to touch in the heat of the afternoon. Potted plants like this Camila are commonly spotted around the town. It was very quiet away from the piazza.

The views surrounding Orvieto are some of the most picturesque I have ever seen. I followed the old medieval wall all around the town and taken photos from every side. 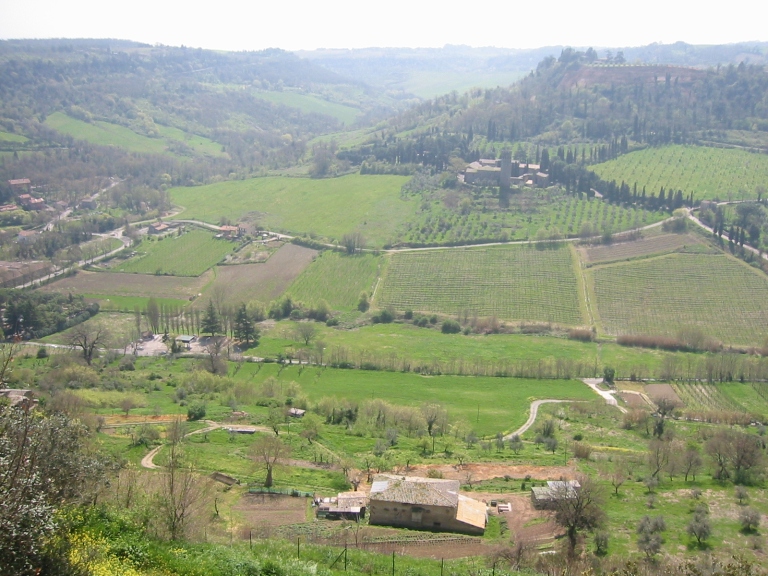 This pathway led outside the walls and down through some of the countryside. Lush variegated greenery rose up around me as I walked through the welcomed shade. A soft breeze swayed the trees gently bringing with it a warm earthy fragrance.

Orvieto can’t be beat for a lovely walk through medieval architecture, artisan shops and family-run restaurants. To see the sites of Orvieto in a day, Select Italy offers a full day tour of the Cathedral, the underground Orvieto, a historical stroll through the town and a visit to a local winery.