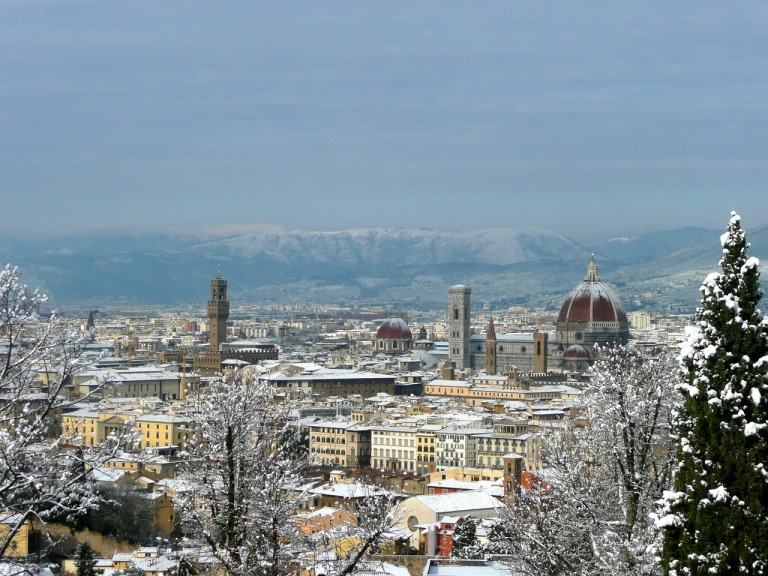 I recently watched the television series, “Medici, Masters of Florence” on Netflix. I found myself so intrigued by the sight of Santa Maria del Fiore (the Florence Cathedral) without the dome that I decided to do a little research. What I discovered is fascinating and makes quite a tale.
In 1418, the Florentine fathers decided to find an architect to complete the dome of the church that began in 1296. The high altar under the dome area stood open to the elements for over 100 years. From the beginning, the church intended to present Florence as one of Europe’s cultural and economic capitals. The city had become rich on banking as well as the wool and silk trades. The fathers determined that the duomo would hold the largest and grandest cupola on Earth. It would be a statement, an assurance that all would understand the power and honor that this crowning glory of Florence represented.
The dome would measure 150 feet across and start at 180 feet above the ground atop existing walls. Flying buttresses and Gothic pointed arches, used by Florence’s rival cities like Milan, were the only architectural method known to work on such a large structure. How would a dome weighing tens of thousands of pounds continue to stand up without them? The dome, built on an octagonal floor plan, would need to hold firm as the masonry used arced toward the top. These were serious questions that no one could answer for sure.
Filippo Brunelleschi, described as a hot-tempered goldsmith yet recognized as a genius, appeared in a contest overseen by the Florentine fathers for an architect that could figure out a way to complete the dome. The prize included 200 gold florins and the honor of a memorable success. Leading architects flocked to the contest, presenting outlandish ideas. Frustration was rampant. Brunelleschi, who wasn’t a trained and certified architect, took everyone by surprise. He promised to build two domes, one inside the other, without the use of expensive scaffolding. It was an impossible idea. He stubbornly refused to expose his plan further for fear that someone would steal his idea.
What the Florentine fathers did know about Brunelleschi is that, during his goldsmith’s apprenticeship as a boy, he had mastered sculpture in silver and bronze, wood carving, stone setting, drawing, and painting. He later studied optics, experimenting with gears and wheels, motion and weights. He spent years in Rome studying the ancient monuments, measuring their proportions and sketching them. He understood their architectural significance.
In 1420, the fathers decided to make Filippo Brunelleschi the superintendent of the dome project. There was one condition that made Brunelleschi cringe. His fellow goldsmith and previous successful rival for the new bronze doors of the Florentine Baptistery, Lorenzo Ghiberti, was to be co-superintendent.

Over the next 16 years before the dome’s completion, plenty of drama took place between these two rival artists. Both earned a yearly wage of 36 florins, even though Brunelleschi was the project’s visionary and operational leader. According to his biographer, Brunelleschi became suddenly sick just when the workmen were about to install a wooden tension ring around the dome. This ring consisted of huge chestnut beams. He delegated the job to Ghiberti, who installed only a few before Brunelleschi made a miraculous recovery. He insisted that Ghiberti’s work was amateurish and ordered the workmen to dismantle the chestnut beams. Brunelleschi complained that Ghiberti did not deserve pay for shoddy work. Archival records show that Brunelleschi was the “sole inventor and director of the cupola.” He did accept a salary increase of 100 florins while Ghiberti remained at 36 florins.

Ghiberti came up with some insidious plans of his own to discredit Brunelleschi throughout the years. With little effect.
Cracks appeared in the east end of the cathedral nave beside the dome in 1429. Brunelleschi reinforced the walls with iron tie bars. The dome continued upwards at the average rate of about one foot per month. On March 25, 1436, the bells of Florence rang in unison throughout the city to the Feast of the Annunciation and the dedication of the duomo. Florence was alive with dancing and celebrating. Pope Eugenius IV and an assembly of cardinals and bishops consecrated the finished cathedral.

Brunelleschi died on April 15, 1446, due to an illness. His funeral was held at the cathedral. He laid dressed in white on a bed surrounded by candles and staring sightlessly up into the dome that he had built. He was buried in the crypt of the cathedral. Renown artists came afterward to paint the cathedral, artists such as Donatello, Paolo Uccello, and Luca Della Robbia. The Renaissance was born and continued on the fertile groundwork of Florence, greatly inspired by this bold reworking of the classical past with current needs and desires of the day.

Have you been inside the dome in Florence? What were your thoughts? Please feel free to share any comments you might have.

22 thoughts on “Brunelleschi’s Incredible Dome of the Florence Cathedral”