A leisurely walk through Rome is one of my favorite things to do while spending time in the Eternal City. History has always fascinated me, and here there are endless traces of it.

While spending time exploring the Pantheon neighborhood, I found myself in Piazza di Pietra, Piazza of Rocks. The name is derived from the stones of the former temple that were used to create the piazza.

The Temple of Hadrian, built in 145 AD by Antonius Pius, Emperor Hadrian’s adopted son and successor, still partially remains as a conversion into a modern office building. Eleven Corinthian columns that tower to over 48 feet high still stand, supporting the original architrave, the beam that rests on the columns. A section of the cella, or original wall, can be seen as well.

Below is a reconstruction of the original temple from Wikipedia.* 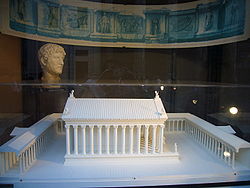 What I found most fascinating is the depth of the original street level, which measures 16 feet. It has been dug out so that the foundation is exposed to demonstrate how much lower the city of Rome sat 2,000 years ago. All of the columns have been gently restored by UNESCO. The massive foundation is made of Proconnesian marble brought from Turkey. The Hagia Sophia temple was partially built by this marble as well.

If you happen to be near the Pantheon, I highly recommend a late afternoon cocktail in the Piazza di Pietra with a view of this stunning temple. As the sun lowers, an interesting play of light crosses the columns. It’s at this moment you may begin to feel present in a bygone time, one that lies well below the surface, teeming with life.