Dan Brown’s book, “Angels and Demons” flashed through my mind as I crossed the Ponte Sant’Angelo one morning in Rome. Ten Baroque statues of angels line the bridge, each bearing a symbol of the suffering and death of Christ. Designed by Bernini in the early 17th century, they look down demurely at passersby from their travertine marble perches. They feel like a silent presence, outwardly still but internally watchful.

Castel Sant’Angelo awaits at the end of the bridge. Reminding me of a cross between a king’s crown and a wedding cake, it stands majestically among the monuments of Rome. Packed with history, it has been here for 2,000 years. Emperor Hadrian had this huge cylinder, built in 139 AD, as a mausoleum for himself and his family. However, for nearly 100 years after Hadrian’s death, it continued as the burial grounds for succeeding emperors as well, ending with Caracalla 217 AD.

Over the past 2,000 years, Castel Sant’Angelo has been more than a funerary monument. It was used as a fortified outpost, a notorious prison complete with a torture chamber, a palace for the popes embellished with Renaissance art, the keep of the Vatican treasury and finally a museum.

What I discovered as I toured the fortress, now the Museo Nazionale di Castel Sant’Angelo, fascinated me. At the time of Hadrian, the mausoleum was topped by a garden of Cypress trees and crowned by a golden quadriga, a huge statue of him riding a chariot. It was the tallest building in Rome.

In ancient Rome, tombs were not allowed inside the city limits. This pertained to the emperors as well, even though they were looked upon as gods. So Hadrian chose a commanding position just outside the city walls and across the river. Even today, it holds a stately presence among the many monuments of Rome.

It helps to get a bit organized so I’ve included a brief overview of the 6 levels of Castel Sant’Angelo:

Level 1- Begins the winding Roman construction ramp, the Courtyard of the Shooting and the Chapel of the Condemned.

Level 3- Military displays, papal apartments, the courtyard of the angel (Cortile dell’Angel), which houses the former archangel, Hall of Justice

Upon entering, an old cobbled road winds around the base. This fortress has a lot of stairs. One leads down to the original Roman floor and follows the route of Hadrian’s funeral procession. There is a bridge that crosses the room where the ashes of the emperors were kept. The urns and ashes were scattered by Visigoth looters during a sacking of Rome in 410.

The Sala del Tesoro is the treasury where the Vatican wealth was kept locked up in a huge chest. The rooms are ornately decorated with rich frescoes and marble.

The Passetto di Borgo is intriguing in itself and historically fascinating. You have probably heard of an elevated fortified corridor commissioned in 1277 AD by Pope Nicholas III leading from Vatican City to the Castel Sant’Angelo (thanks to Dan Brown). The passage served as an escape route to the Castle for popes during times of war and sackings.

Enjoy a gallery of photos from my day spent inside this massive fortress. It would take a book to explain everything. One of several things that impressed me was the circular walkways leading up and down within. Wide and tall, they were lit with the golden light from wall lamps. Effectively mysterious… 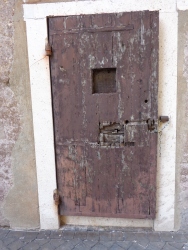 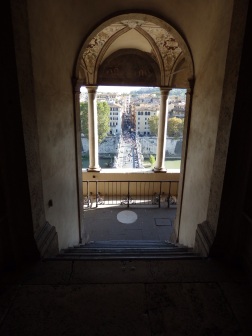 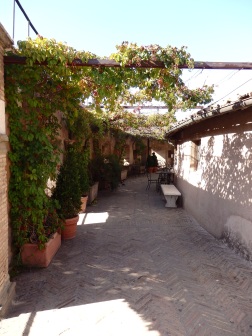 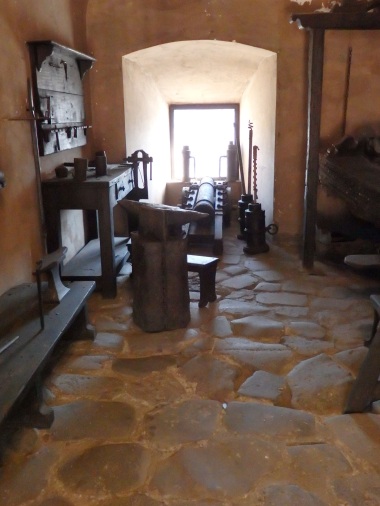 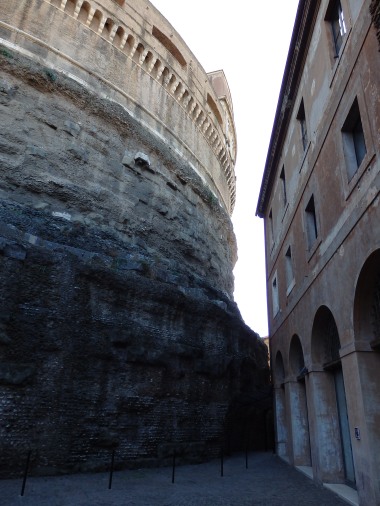 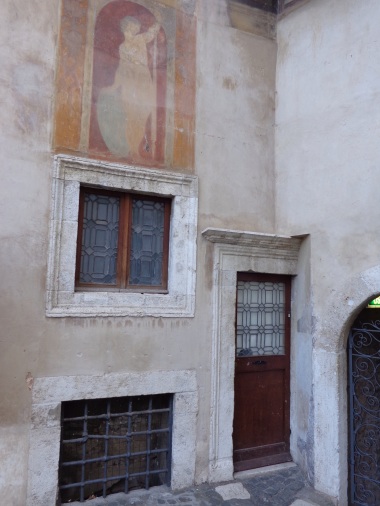 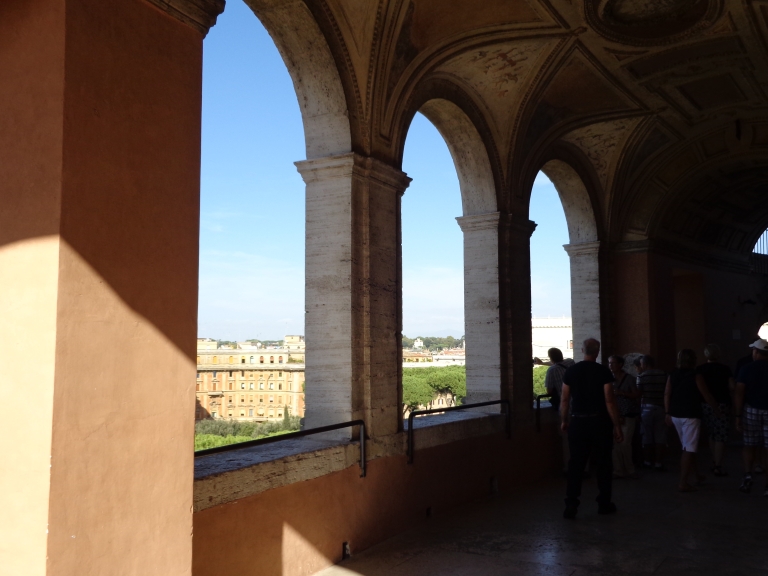 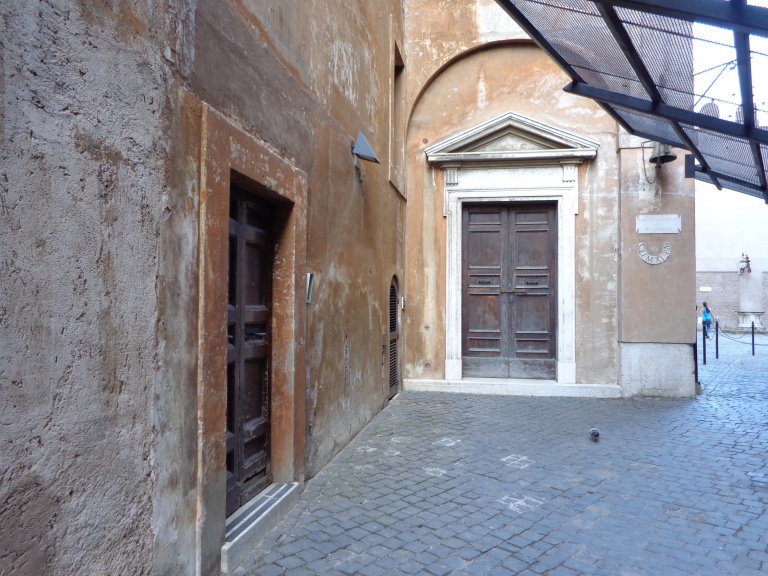 The Angel Terrace offers dazzling views of Rome from several directions. The wind was gusty so walking from one end to the other for a view was slightly challenging.

It’s from here you can get up close to the majestic Archangel Michael, who stands on the very top. As I gazed up into his face, I had no doubt that he means business.

So what’s the deal about the angel Michael? As the story goes, in the year 590, the Archangel Michael appeared above the mausoleum to Pope Gregory. The angel sheathed his sword, and the pope took it as a sign that the plague was ended. It soon became a fortified palace renamed the castle of the holy angel.

Close beside the Archangel Michael is a large bell, called the Bell of Mercy. Beginning in the mid-1700’s it was wrung to inform the people of capital executions of the prisoners while a prison.

As the grand finale, enjoy some views of Rome taken from the Angel’s Terrace

**Resources used are from the National Museum of Castel Sant’Angelo**

26 thoughts on “Castel Sant’Angelo: A Turbulent Tale of Angels and Demons”