Among my very favorite things to do while in bella Italia is to visit the wineries. As one of the oldest wine-producing regions in the world, some of the very best come from Italy. Italy supplies nearly one-third of the global wine production. In fact, Italy is now the world’s largest wine producer by volume, closely followed by France. With more than one million vineyards under cultivation, Italian vintners know a thing or two when it comes to making delicious wine.

Each region specializes in their own varietals and blends of wine that give it a particular character. For instance, in Campagna to the south, the wines tend to have more minerality mostly due to the lava-rich soil of Mt. Vesuvius. To the north, the bold red Chianti and Barolo are intense, firm and supple with strong fruit flavors.

I have listed five wineries that I particularly love below. All of them have left me feeling richer in experiences, from the delicious wines and cuisine to the owners and staff themselves who take such pride in their products. 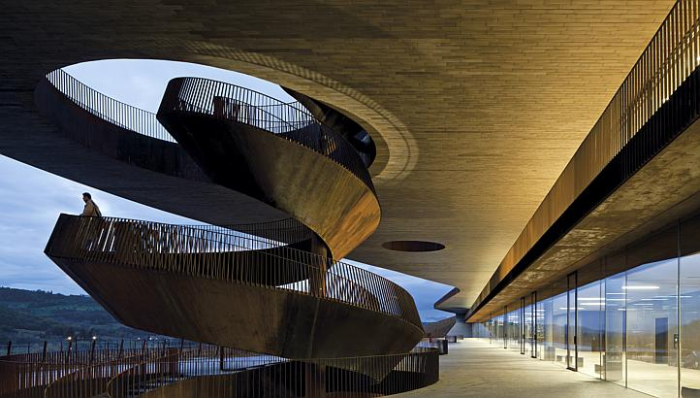 Must love unique architecture and great wine to enjoy a visit here. Marchesi Antinori, whose Florentine family has produced wine for over six centuries since 1389, owns and operates several wineries with this being one of his newest. Construction of the cellars was done with local materials, keeping a maximum respect for the environment a high priority. The cellars are one of the most amazing structures I have ever seen.

Located in Atripalda, a small town east of Naples in the region of Campagna, the Mastroberardino winery gives off the feeling that you’ve just stepped into an ancient world. Inside, ceilings are brightly painted with mythical scenes of scampering fauns and dancing goddesses. They swirl about each other much like wine swirls inside the glass when poured. In a land steeped in ancient lore, it only seems appropriate.

After a tour of the facility, a tasting of superb wine accompanied by traditional Irpinian foods, if you choose, awaits. From the ruby-red medium bodied Aglianico to the pear-fresh, mineral-structured Greco, these wines inspire the temptation to dream.

Mastroberardino is the only winery in Italy that is directly involved in discovering and producing the authentic grape varietals of ancient Pompeii right on the original vineyard site. Fascinating in itself, the resulting wine produced and bottled from these vines is called Villa dei Misteri, a blend of 40% Aglianico, 40% Piedirosso, and 20% Sciascinoso. Each year bottles of Villa dei Misteri are sold in very small quantities to those who highly value it.

The Castello Monaci Estate is housed in a beautiful 16th-century castle, complete with crenelated walls and a stunning inner courtyard garden. Popular as a wedding location, the medieval foundations are still evident, attesting to an earlier existence. The grounds were once owned by Basiliani monks who operated a long-standing winemaking tradition.

Today, the Salento winery can be experienced with a cellar tour followed by wine tasting. It is one of the few estates in Puglia certified sustainable. Intense sunlight, typical of the area, combined with the cooling breeze from the Adriatic and Ionian seas produces wine with exquisitely balanced fruit. The estate produces predominately Primitivo, Negroamaro, and Malvasia Nera. The popular Salice Salentino, a popular blend made from the Negroamaro and Malvasia Nera, has a deep color, medium-full tannins, and berry fruit flavors.

The Cantele estate believes that wine is food, and when combined with dishes at the dinner table contribute to making the balance, aromas, and flavors of a delicious meal. With a great concern and emphasis on making a minimal environmental impact from herbicides and pesticides used in the vineyard, the Cantele winery has put themselves on the cutting edge of pursuing a healthier product and lifestyle.

While tasting these delicious wines, I enjoyed a nice conversation with the owners and staff.

Wines produced here are typical of the Salento region with the addition of the straw yellow Verdeca and a crisp Chardonnay. Their newer vintage called Rohesia, a rich cherry Rosè “without compromise,” as they call it, has shown promising results.

Nestled in the heart of Chianti Classico lies the veritable Castello di Verrazzano. Surrounding Renaissance gardens give way to a late Romanesque tower that served as a lookout over the Greve valley to control the trade between Florence and Siena. The estate is truly picturesque.

Giovanni da Verrazzano, the famous navigator and descendant of the family, is credited with being the first to explore the east coast of America by persuading King Francis I to fund the expedition. Giovanni was convinced he could find a passage to the west from the Atlantic to the Pacific. It was on April 17, 1524 that he reached New York Bay. But on his third expedition in 1528, he fell in with a tribe of cannibals.

Verrazzano produces outstanding and world renown wines. Among them are the Chianti, Chianti Classico, Super Tuscan such as Sassello di Verrazzano and Bottiglia Particolare. In the ancient cellars are housed vintages since 1924.

8 thoughts on “My 5 Favorite Italian Wineries”