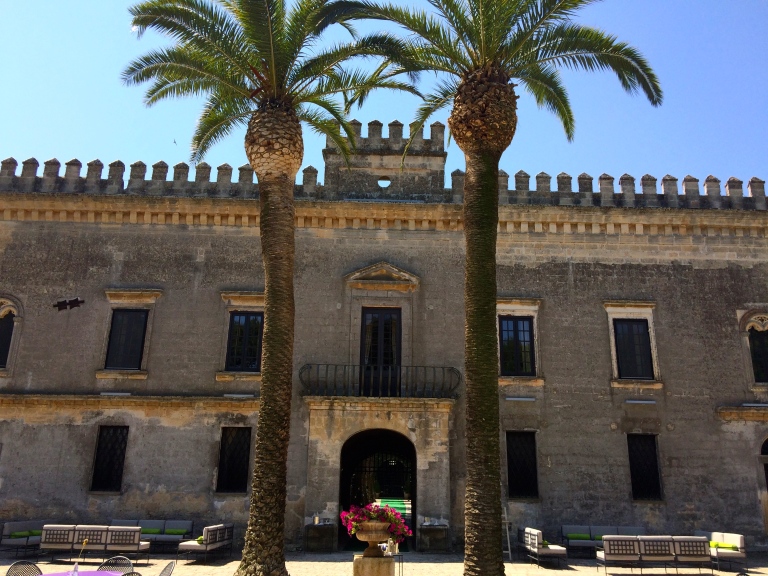 Have you ever been to a winery that is somewhere between heaven and bliss? I’m not sure that spot exists, but I would say this describes the popular Castello Monaci winery in Puglia. The sun-drenched vineyards lie between the Ionian and Adriatic seas in Puglia’s Salento region. Nestled in the “heel of the boot” that is Italy, Castello Monaci is a point of reference winery that cultivates the unique characters of native grapes Negroamaro, Primitivo and Malvasia Nera di Lecce. The intense sunlight on the land is softened by the cooling effects of the ocean breezes, contributing to a special kind of wine, those infused with an ancient minerality.

I had the opportunity to visit the Castello Monaci recently with a small group of friends. Founded by monks in 1492, it has maintained a long winemaking tradition ever since. It is a vision from a fairytale. Embellished by statues sculpted in soft, ivory colored stone, the crenelated walls encase a courtyard garden infused with loveliness. A popular place for weddings and celebrations, the large and stately interior rooms could accommodate any event with finesse. Lina Memmo, whose family has owned the estate since the 19th century, currently owns the property along with her husband Vitantonio Seracca. 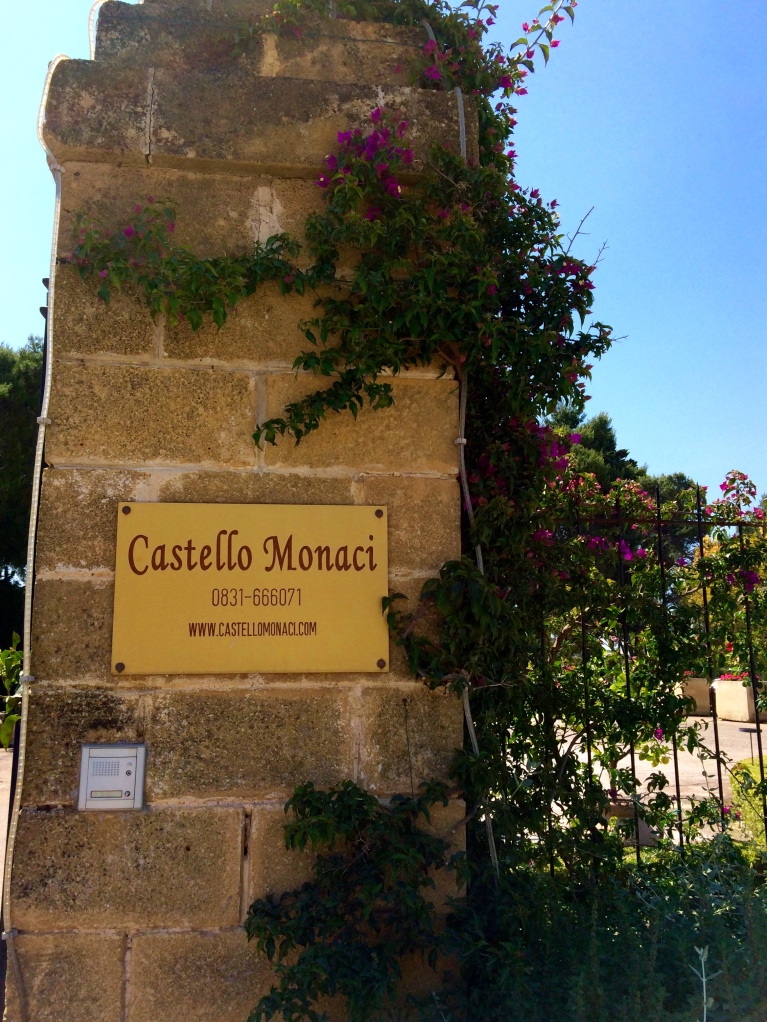 As you enter the estate, a long tree-lined road leads up to the castle and cellar. Over 350 acres of grapevines fan out broadly on either side, the fruit still small but ripening in clusters under the warmth of the sun. Each section of vineyard is cultivated, collected and vinified in small tanks. The vintner would say that these particular wines are disegnati dal sole, or ‘crafted by the sun.’

The winery is expansive. Less than 20 years ago Castello Monaci produced 20,000 bottles but today production has increased to nearly 2 million bottles due to the growth of the estate. Gruppo Italiano Vino (GIV), Italy’s largest wine company, manages the estates wine-making activities. 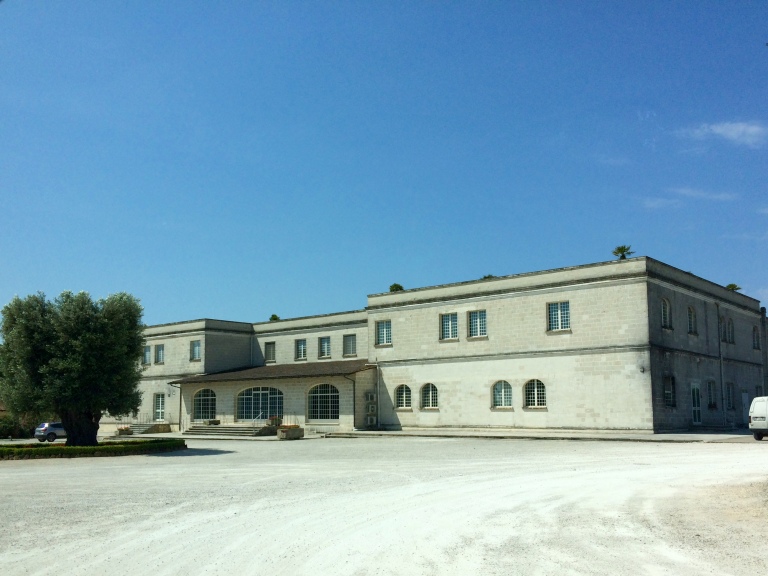 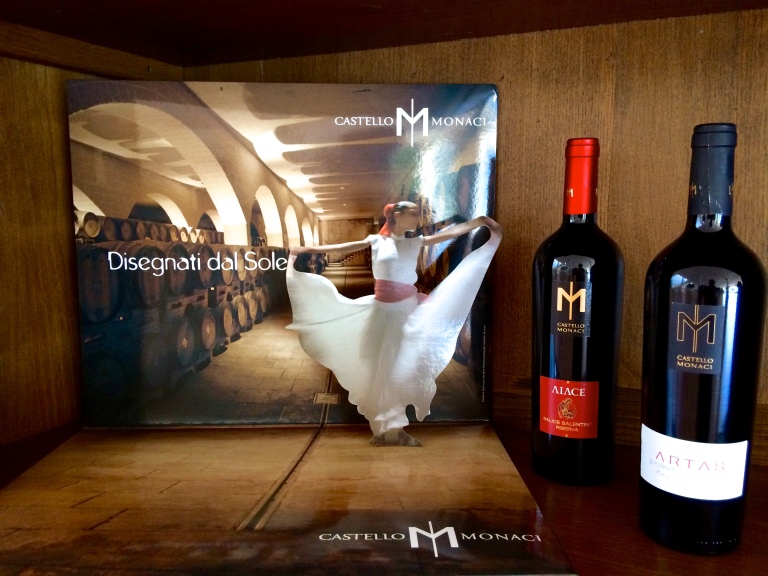 Claudio, our tour guide, took us through the wine production area, a refrigerated crushing system with temperature controlled steel tanks that allow limited quantities of grapes to be vinified separately. 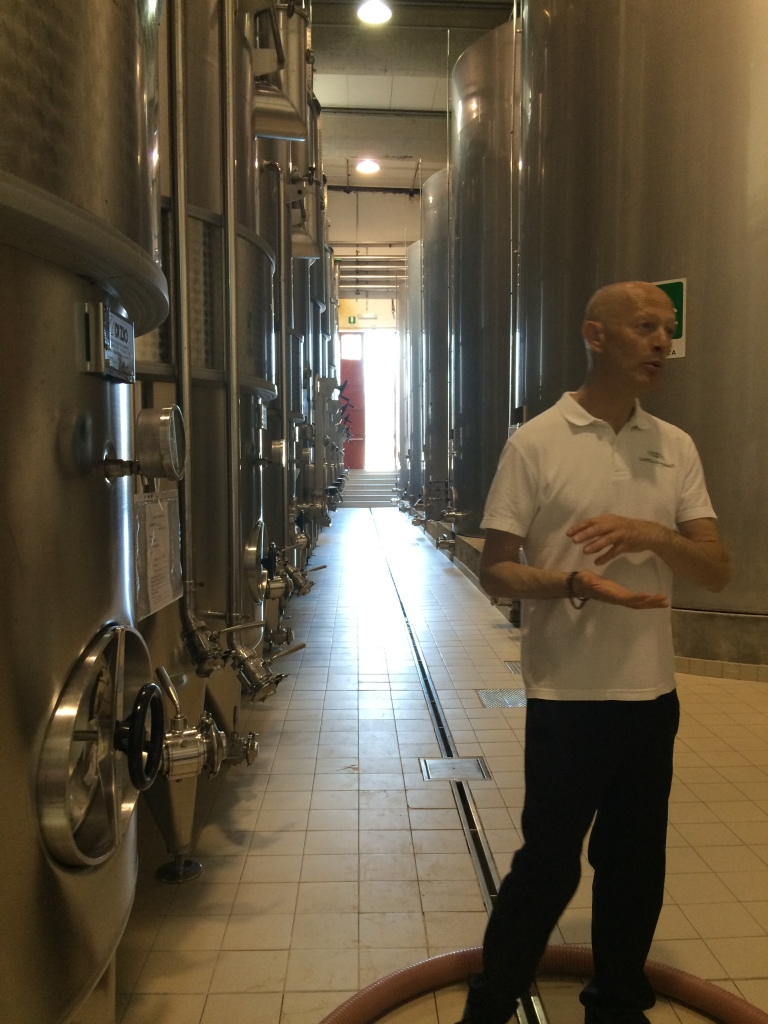 The cellar holds over 1,000 barrels of wine. 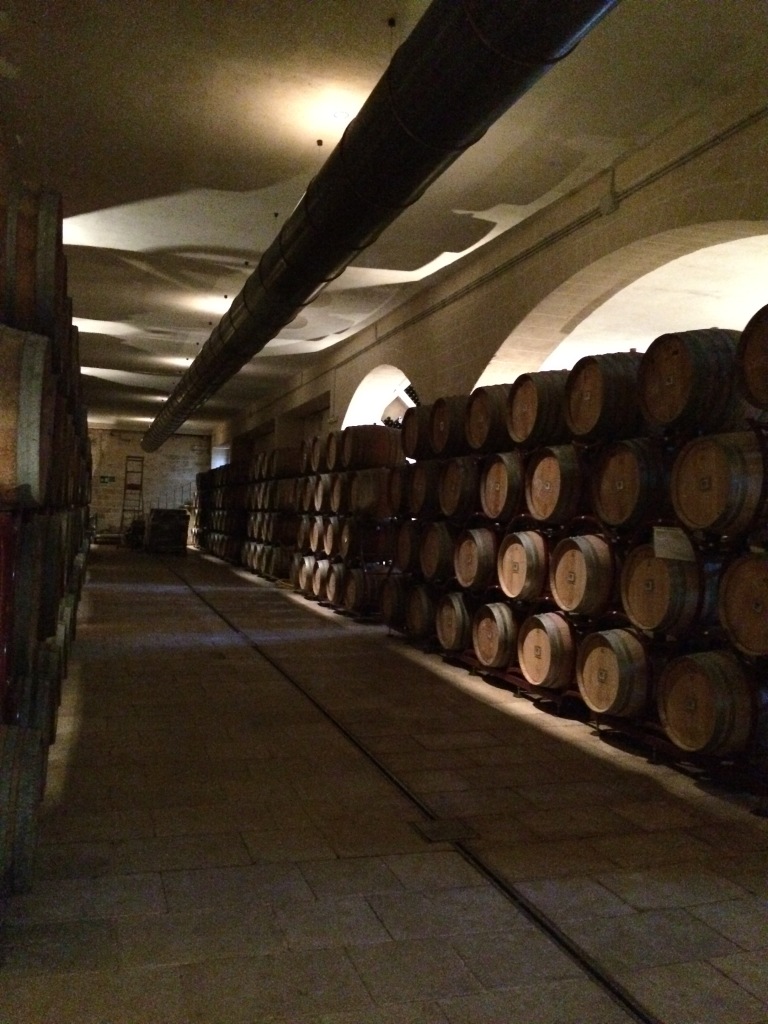 The land is thick with tufa, volcanic rock that is present in the soil. Claudio explained that as it travels to the surface, its white color reflects the light and increases the benefits to the grapevines. In the cellar, a wall of tufa acts as an effective source of insulation to keep the temperature cool. 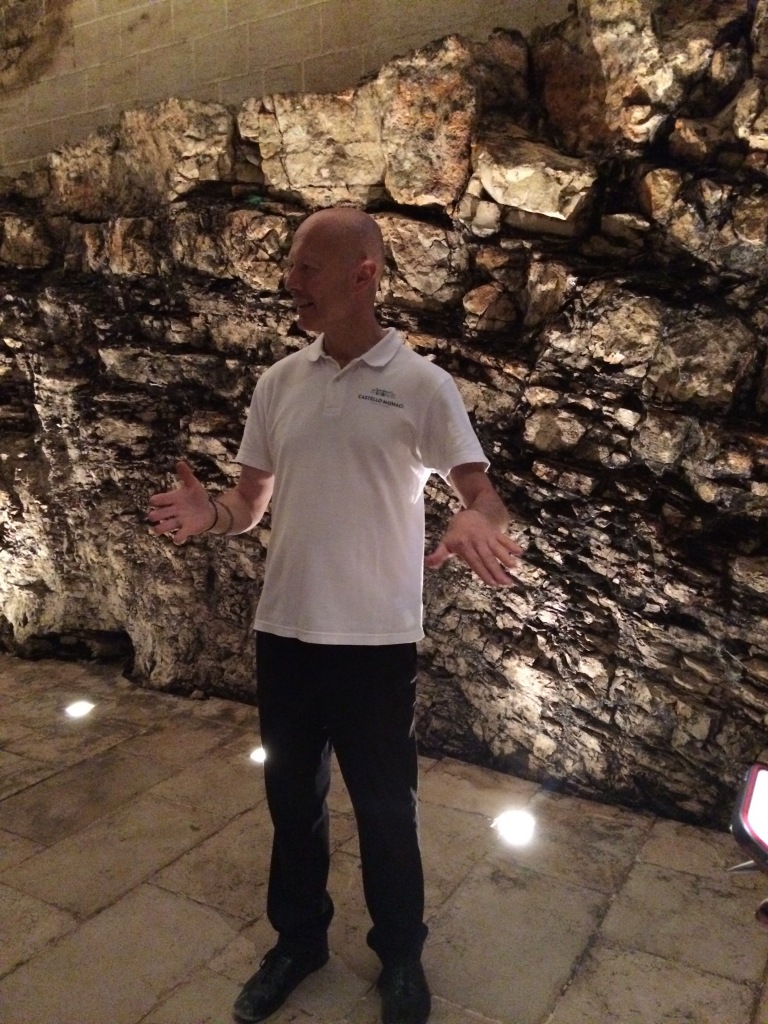 After the wine tour of the cellar came the product tasting. 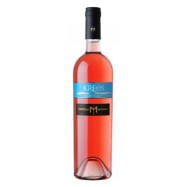 During the wine tasting, I learned that most of the Castello Monaci wines are named after mythical Greek characters – Medos, Kreos, Aiace, Acante, Artas, and Piluna – as a tribute to Apulia’s early Greek origins. The Primitivo, Negramaro and Malvasia nera di Lecce grapes are cultivated right in the vineyard on the estate.

Kreos, a delicate rosato of 90% Negroamaro and 10% Malvasia nera di Lecce, was one of my favorites. Its name comes from Eos, goddess of the sun whom Homer called goddess with the rosy finger. It is a perfect warm weather wine which is fermented in special steel vats with a short contact between the skins and juice. Bright pink in intensity, it brings to mind sea corals of the Mediterranean. 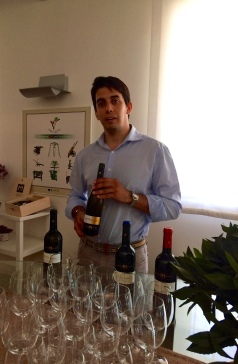 Another excellent wine is the Piluna Primitivo. Piluna means “tufa pot” in Greek and is produced by a well-known grape around the world, the Zinfandel. Some of the wine matures in French barrels for 6 months while the rest remains in steel. The color is dark crimson with a robust yet velvety feel to the mouth. It carries an essence of ripe red fruits with hints of vanilla and pepper.

Liante “Wind of the Levant” Salice Salentino is named after the “icy wind of winter and the hot wind of summer which blows strongly over Puglia.” This deep, ruby-red wine is obtained from Negroamaro and Malvasia nera di Lecce grapes. They are separately vinified because of their different times of ripening. Hints of wild cherry, chocolate and vanilla combine with a warm and balanced flavor.

Interesting to note is the icon that represents Castello Monaci. It is a large M with a horizontal line down the middle. Let me explain the meaning of the icon with the words of Castello Monaci ~

“A name embracing several facets. A meridian, a line which divides part of the earth. A big M. Castello Monaci. A symbol, a brand, which stands for the union of the work of man and of the sun. Creating a unique whole.”

The following photos are of the Castello Monaci, ending with the lovely palm-lined courtyard. 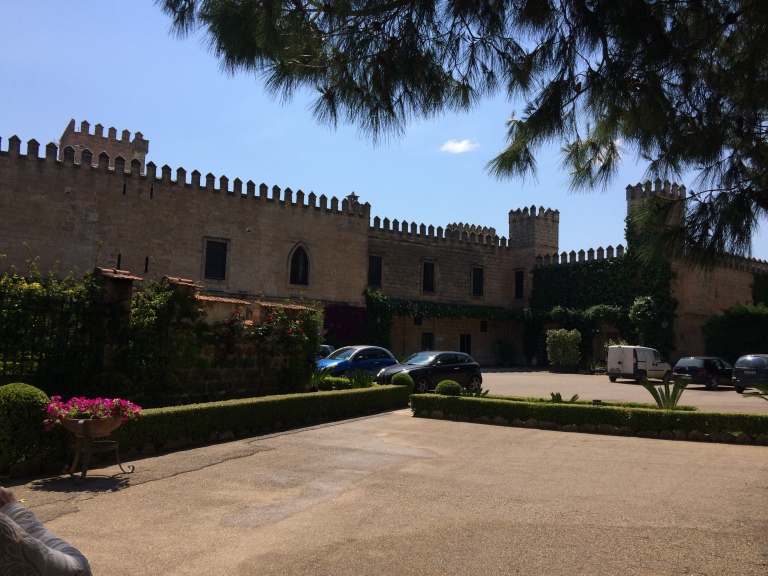 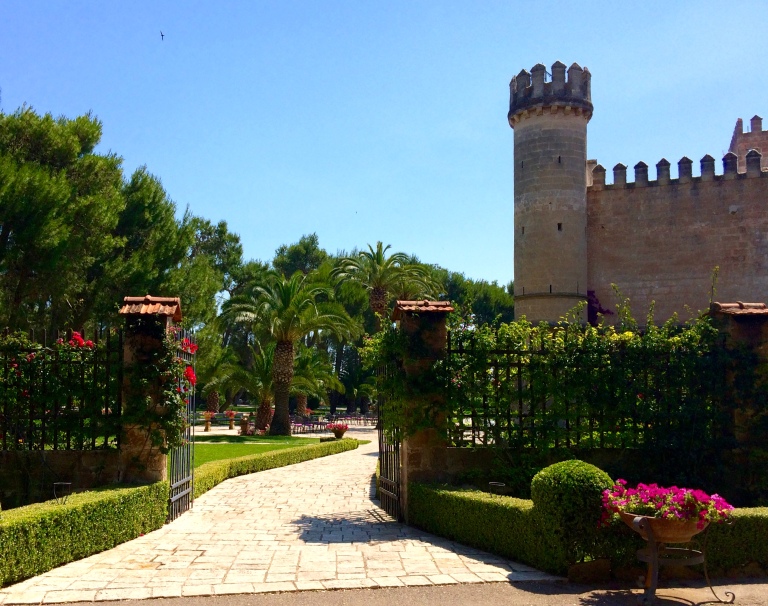 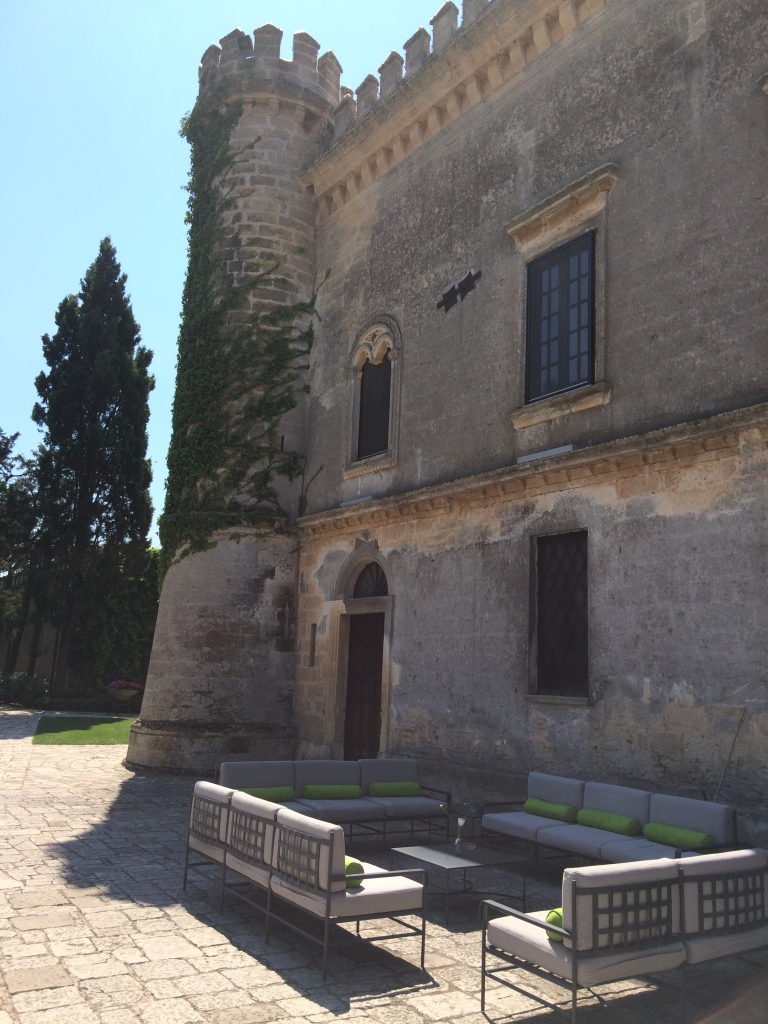 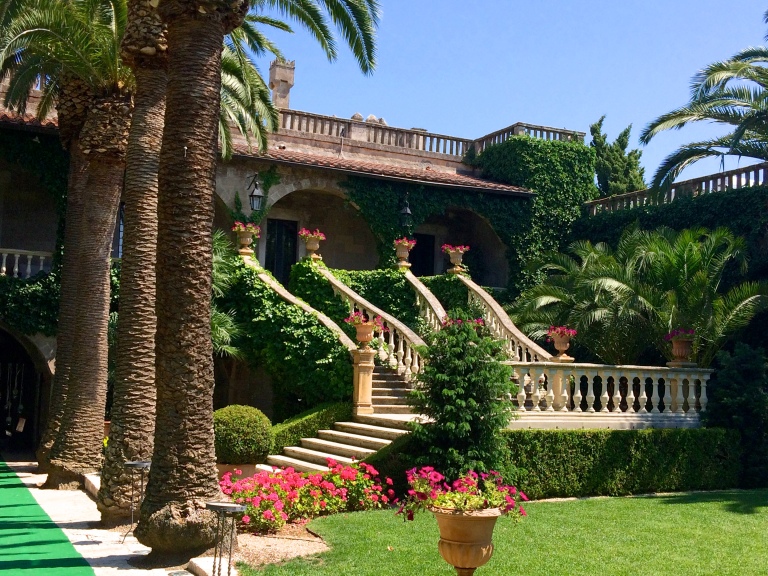 Do you have a favorite Italian wine or winery?  I would love to hear from you so don’t hesitate to share your thoughts.